The game of table hockey was invented in 1932, in Toronto by the Canadian Donald H. Munro Sr. Don, like so many Canadians in the depths of the depression, was short of cash for Christmas presents. He had a wife and three young children. That year, the family all pitched in and made the first table hockey game. This mechanical game was built out of scrap wood and metal, and included used coat hanger wire, butcher's twine clock springs and the lumber came from the coal bin. Unlike current games, the game looked more like an early pinball game, with one key difference: this was a two player game. The playing surface had a peak in the middle and sloped down toward each end. The players controlled levers for the goalie and flippers for the players.[1] The story goes that a travelling salesman noticed the game and encouraged Don to take the game down to the local Eaton's department store. Don did just that. The first game went in on a consignment deal. By the time Mr. Munro got home, the game was sold and more orders were placed. 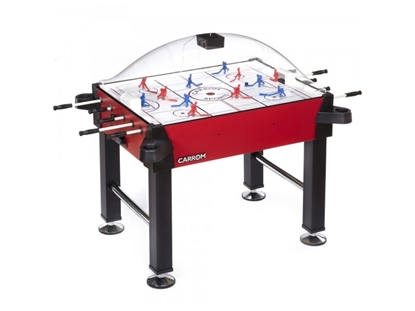 35201
Table hockey dome avec porte gobelets.
Call for pricing
Quick view
You have no items in your shopping cart.